Growing Opportunities for Private Equity in Oil and Gas

“I think this (oil prices falling) is going to be a wonderful, wonderful opportunity for us. It’s going to be one of the best opportunities we’ve had in many-many years.”

This is a statement made by none other than Stephen A Schwarzman, the Chief Executive of the Blackstone Group, the world’s largest private equity firm.

With the falling oil, Stephen A Schwarzman sees a buying opportunity for the private equity. He was speaking at the Deal Book Conference in Manhattan on 11 December 2014.

Blackstone raised $4.5 billion for energy focussed private equity fund, crossing its initial goals of $4 billion in February 2015. This is second fund raising within three years. The first energy fund was for $2.4 billion.

Blackstone is not the only private equity which sees growing opportunities in oil and gas. Carlyle, KKR and Apollo are some of other leading private equity firms that are raising funds for energy deals as oil and natural gas companies struggle hard to survive.

Let us have a look at some of recent private equity activities focused on the oil & gas sector.

Carlyle Group LP has raised $2.5 billion for an international energy fund, surpassing a $1.5 billion fundraising target. The firm got good response and closed the fund after commitments from 160 investors. “This is one of the best periods, if not the best, to invest in global energy,” says Marcel van Poecke, Head of Carlyle International Energy Partners.

According to Preqin, last year 52 private equity funds raised $39bn for investments in the oil and energy sector, a jump of 20 percent over previous year and highest since 2008. Currently many private equity firms such as Riverstone Holdings, Kerogen Capital, Ridgewood Energy and EIV Capital are in market to raise over $11 bn funds either exclusively for oil and gas or together with energy and power opportunities globally. Oil slump has attracted investors and drive private equity fundraising. 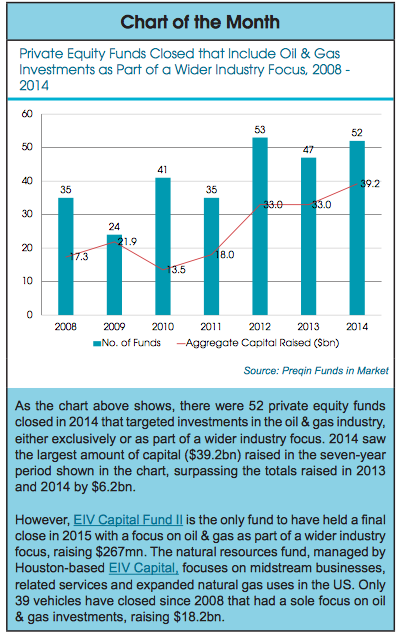 Private equity firms are investing in oil companies engaged in acquiring, developing and exploiting oil and gas assets. There are increased opportunities in North America fields including Western Canada. They have already committed investment in oil and gas exploration and production companies such as Prairie Storm Energy Corp, Rio Oil & Gas and Velvet Energy. The private equity firms are investing also in oil fields equipment and service providers and midstream companies.

“Oil and Gas Private Equity-backed deals are increasing,” reveals an analysis by Preqin. In the US alone, over 500 deals valued at $102 bn took place in last eight years, with maximum deals closed last year. Out of these, the two- thirds deals were leveraged buyout deals and growth capital deals. 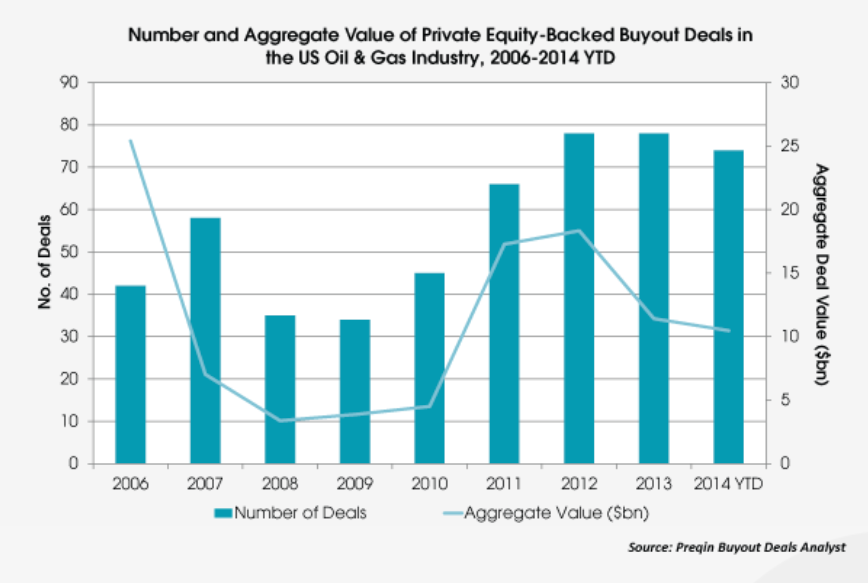 Source: Increase in Oil and Gas Private Equity-backed Deals in the US 2004-2016 YTD

Global oil demand, which is presently around 94 million barrel per day is likely to grow at the rate of 1per cent. The oil industry need huge capital to maintain and enhance production. The capital requirement would continue to grow. This is drawing more number of private equity firms into the oil and gas.

US is the most preferred location for oil and gas deals. One out of every two deals globally take place in the US and particularly in three US states: Texas, Oklahoma and Colorado. These account for two-thirds of total value of deals. Canada and UK are other destinations. Some private equity firms invest in emerging countries also.

This is outcome of the Shale Gas revolution witnessed in the US during last ten years. Shale oil and shale gas exploration and production witnessed a surge in activity in recent years. High oil price above $100 a barrel attracted new investments. Many small companies backed by private equity came up. They were highly leveraged. With 50 percent fall in oil price, these companies have cash flow problems. Most of these oil assets are now available for deals at a bargain price.